What a weekend! Professor Mysterious is back from Transworld's Halloween and Attractions Show, the biggest - really, the ONLY - event of its kind! We had an amazing time, and met so many incredible people from the haunt industry, Halloween attractions, and every kind of related business: "corn maze, farm, pumpkin patch, paintball field, family fun center, amusement park, zoo, aquarium, Halloween retail store", everyone! We want to thank Transworld for putting on an incredible show, and to everyone who stopped by the Professor Mysterious booth to see our fog fluid and fog scents.

Just coming to St Louis is astonishing: seeing the Gateway Arch, standing tall over the Mississippi River, welcomed us to the city like nothing else could have. The neighborhood around the convention center was welcoming and bustling, with some incredible restaurants nearby, and even a great little grocery store not far away. But entering the convention center itself was a whole new world of amazement: it's absolutely massive in a way you just have to see to believe. It takes a long time just to walk from one side of the convention center to the other: it's a good two-minute walk just from the entry doors to the event hall! And that means a LOT of people, and a lot of booths, and a lot of new friends to make. 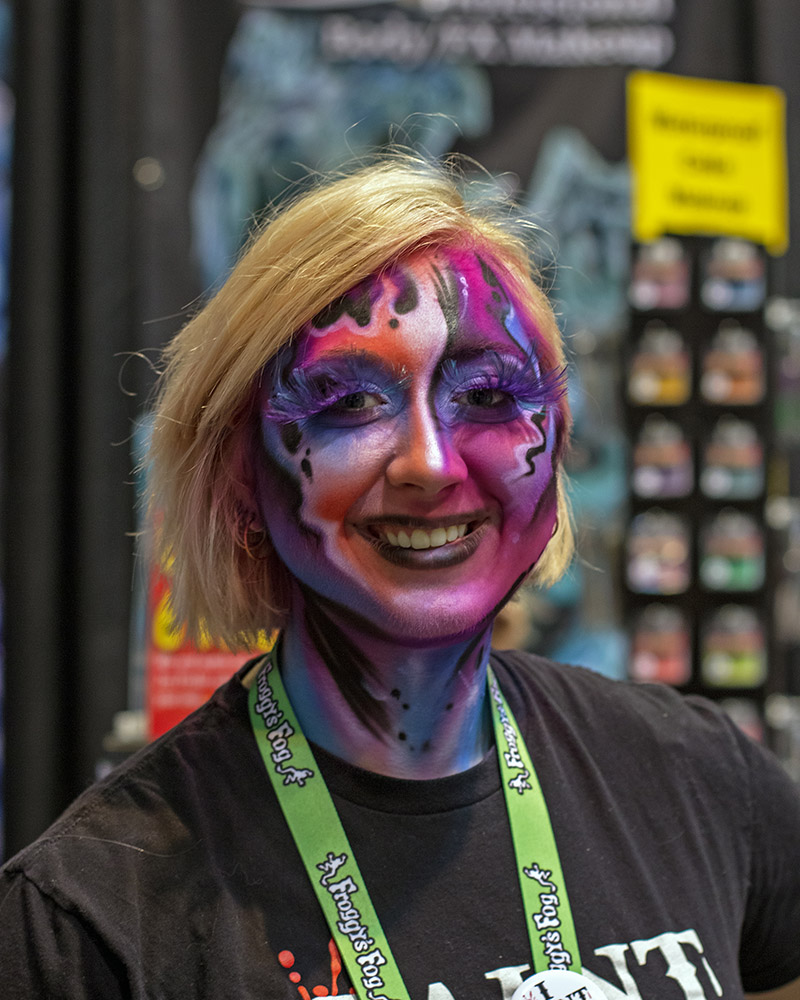 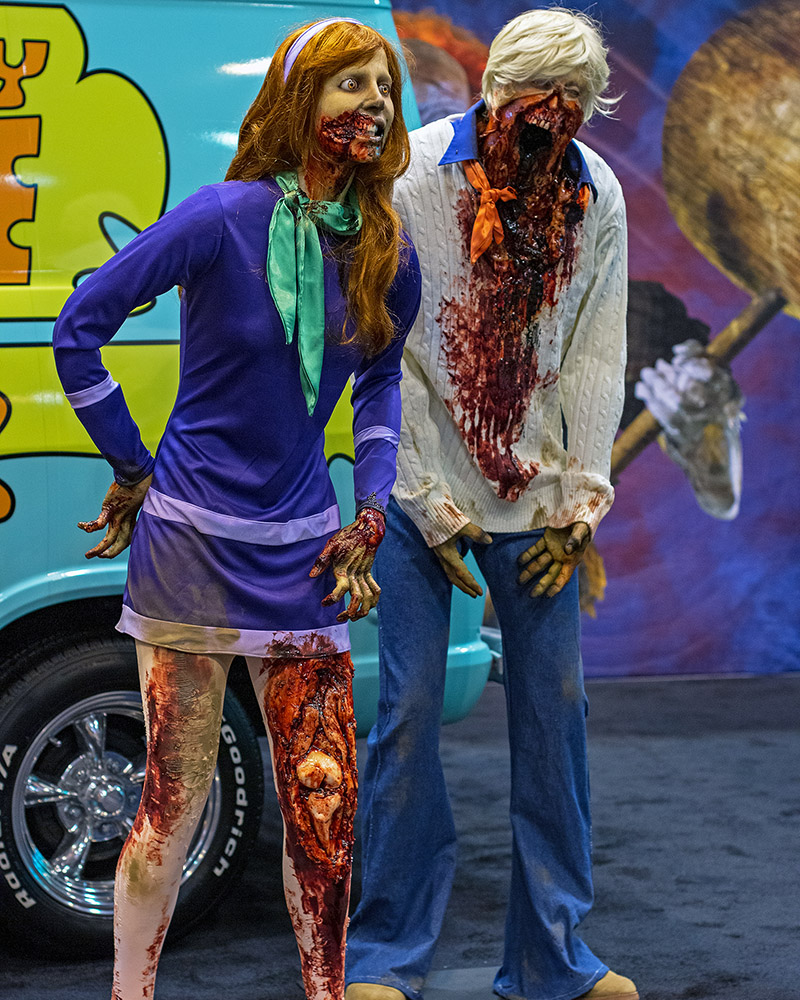 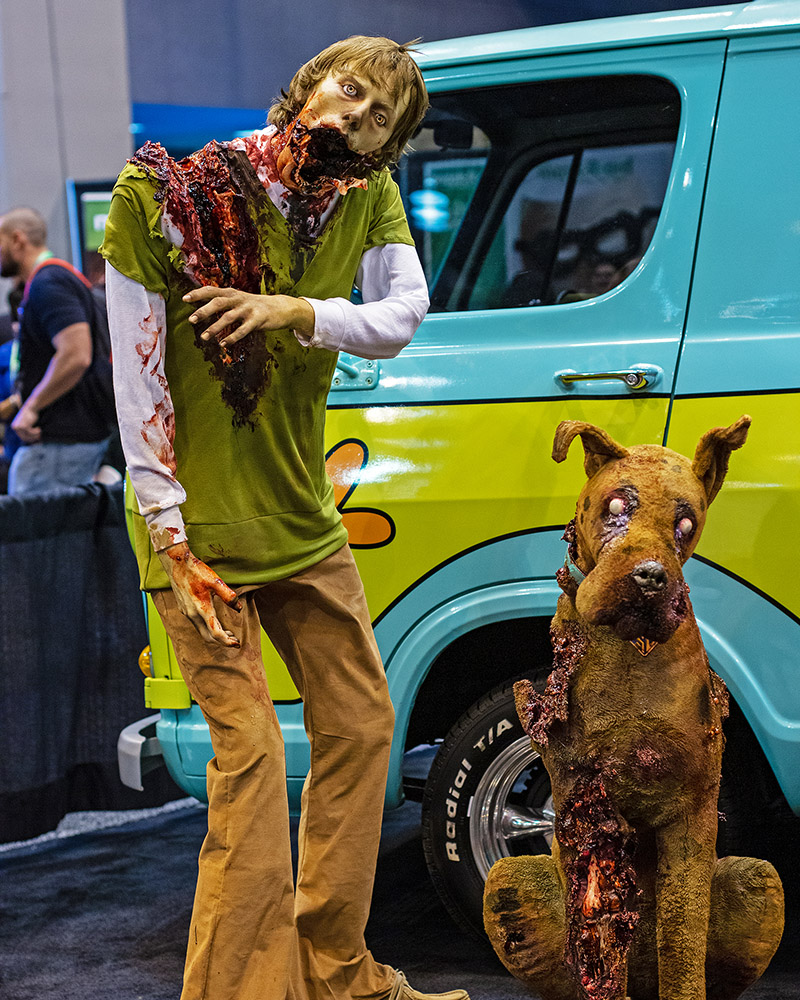 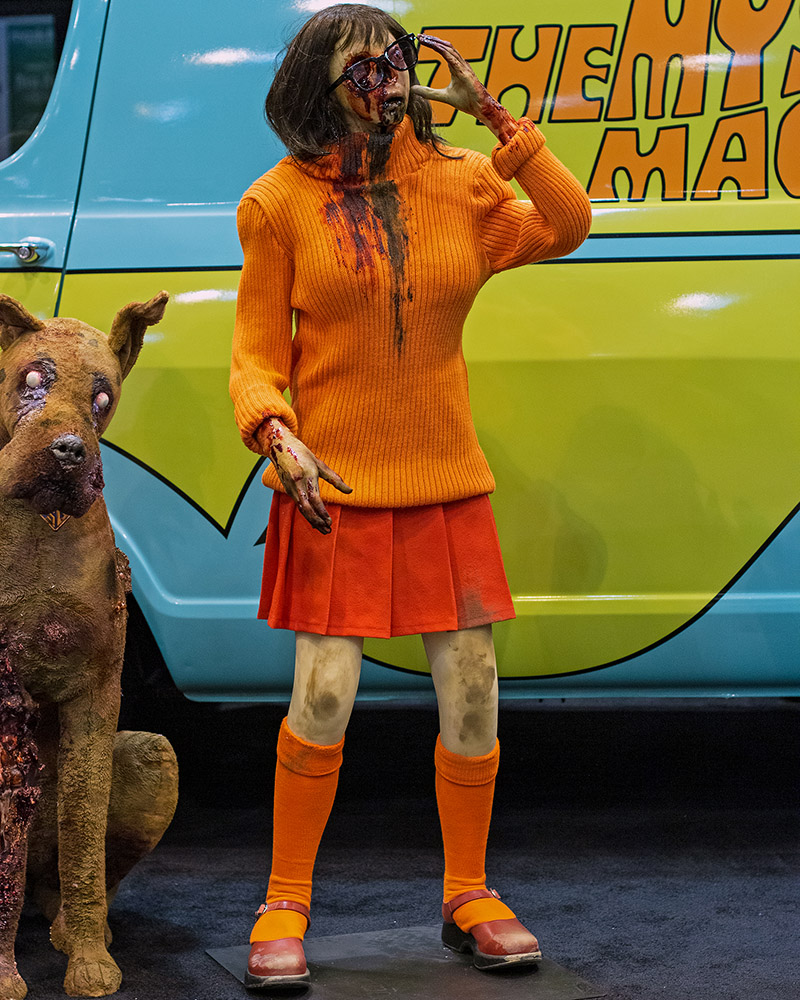 Our own booth was right across the hall from the VIP booth, which was a perfect placement for our first HAAS. Our neighbors were Vue Thru 3D, and we couldn't have asked for better people next door. They really helped to make our first show memorable - and probably saved John a broken neck by loaning us their ladder so he wouldn't fall every time he needed to refill our massive fog fluid tanks! They had a fantastic green screen setup, where we had loads of fun taking pictures of their staff holding our severed heads - it's better than it sounds!

One of our favorite booths was the ProAiir Body/FX Makeup booth. They had Avi Ram and Dutch Bihary from the Netflix show "Skin Wars", doing live body painting all weekend, with some demos and tutorials up on the main stage. These guys blew our minds with how detailed they could paint an entire human body in such a short amount of time. It was great stopping by periodically throughout the day to see the progress that had been made.

One of the strangest sights was a booth with just a giant open space, with a bunch of people wandering around with VR headsets on. At first glance it was rather comical to see a couple dozen people all just slowly moving around, but from their perspective, they were trapped in a zombie apocalypse! The booth belonged to ARVI, and they had TVs up so bystanders like us could see the view the AR participants had. Super cool.

Transworld's Halloween and Attractions Show is about more than just the booths, though! Off to one side of the hall, they had a "Dark Room" that was literally breathtaking - see the video above! A massive variety of animatronics, moving and doing jump-scares and making a bunch of noise. There were Halloween-themed carnival-style games in there, like a ring toss where you throw rings around moving skeletons arms, or a basketball game where the Grim Reaper himself guarded the basket!

Throughout the weekend there was a constant stream, too, of seminars and events for both the attendees and the vendors. There were many haunt consultation seminars, where haunt owners go could get together and discuss ideas, or problem-solve issues with their haunt. While the convention floor is the beating bleeding heart of the show, these seminars are the zombie-eaten brains, where a lot of the real work gets done, educating attraction owners and vendors on how to improve their businesses.

The after-hours events are also spectacular. In our exhaustion, we abstained, but there was a Vampire Circus performance one night, and a Vampire's Ball the next night: while we were way too tired from our first HAAS to go in, we had a huge amount of fun just standing at the entrance of the ball to see all the costumes as people entered. 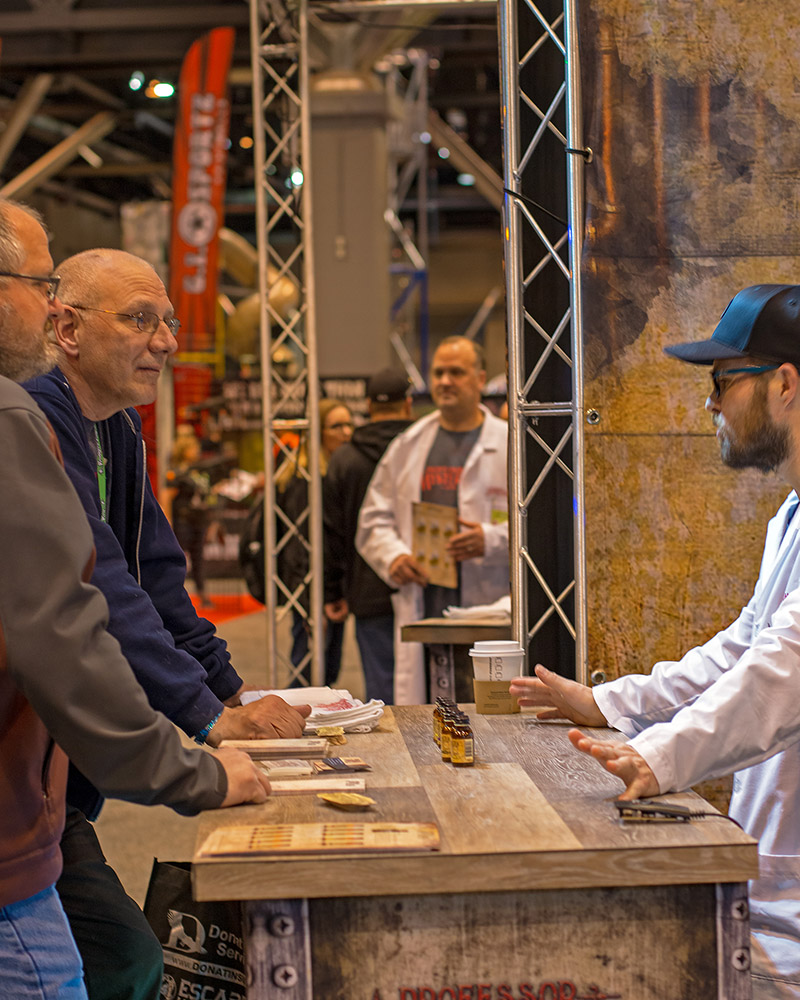 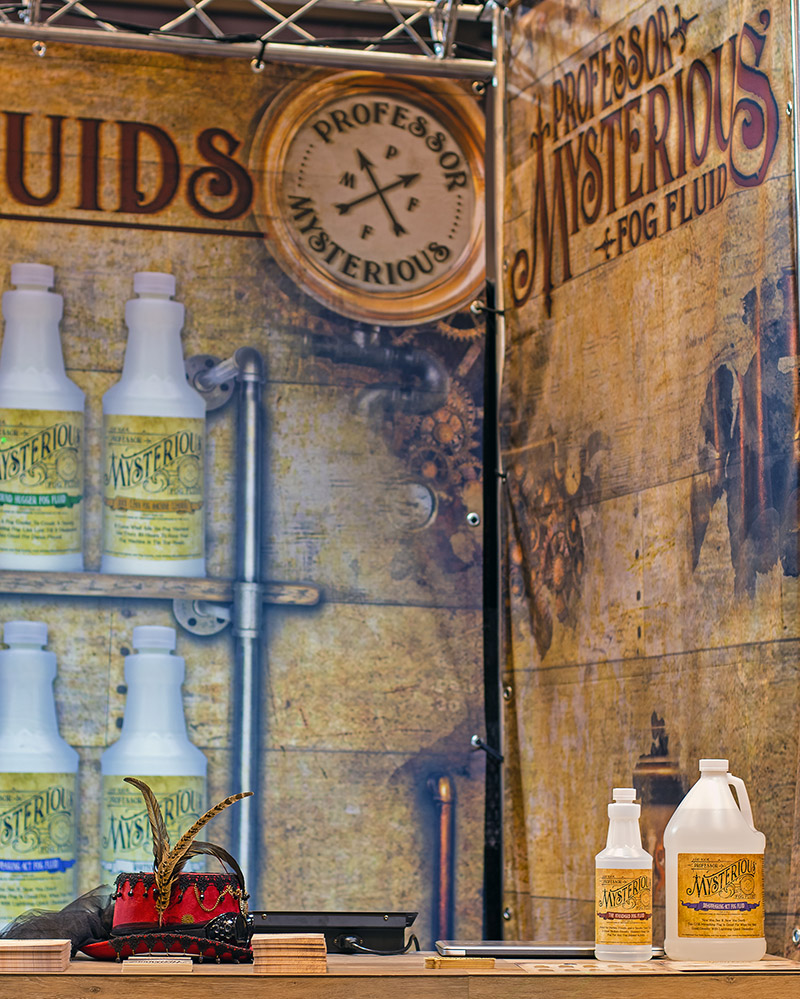 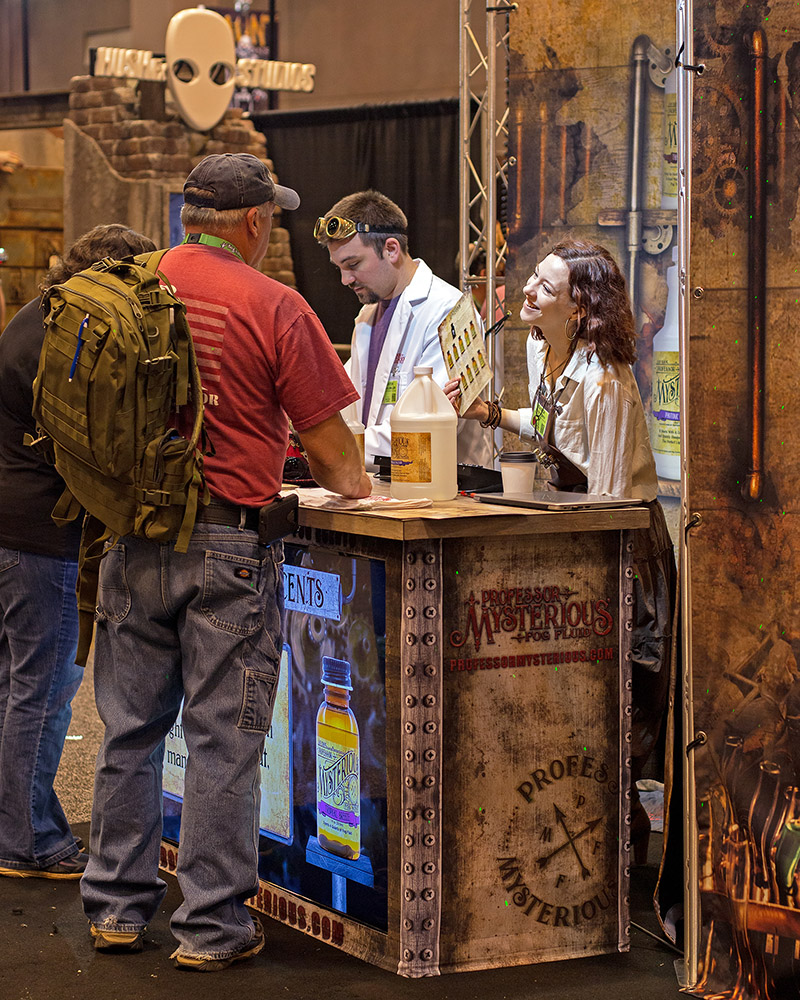 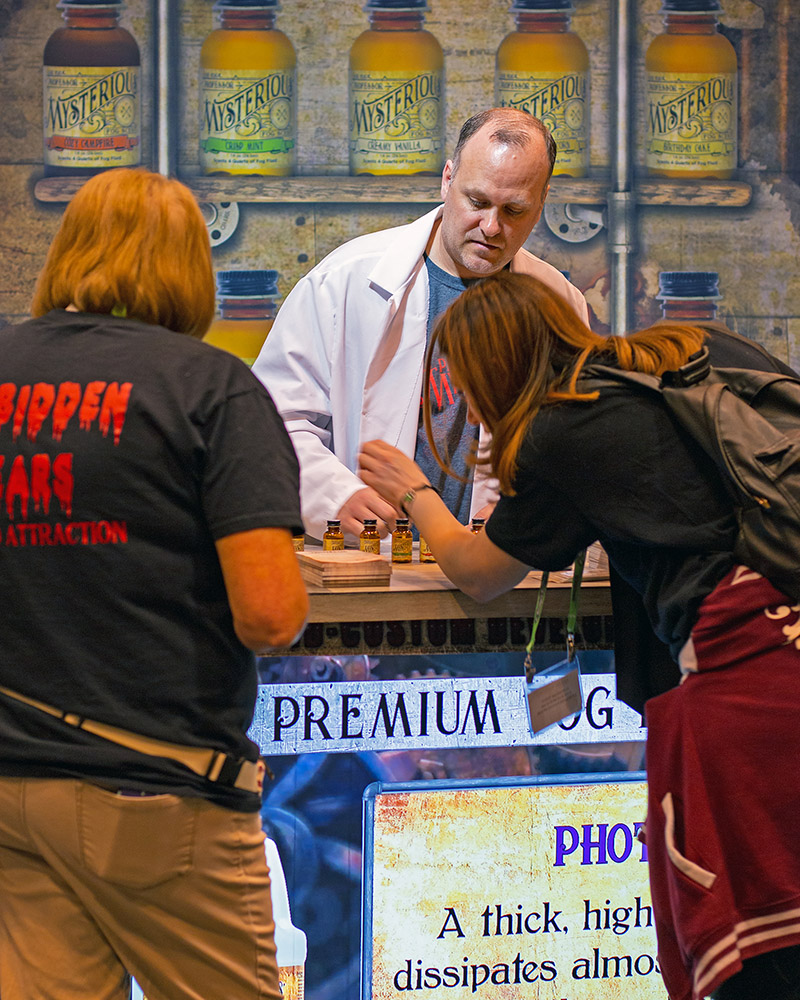 In all, it was an amazing weekend, and a fantastic experience all around. We'd like to give special thanks to Party Machines: it was wonderful to see you all again. And it was awesome to see Joey Simpson from Kissing Candice, proud users of Professor Mysterious fog fluid! Again, our thanks to Vue Thru 3D for being great neighbors, and of course to Transworld for putting on an absolutely incredible Halloween and Attractions Show.

One thing's for sure: we'll be back next year! 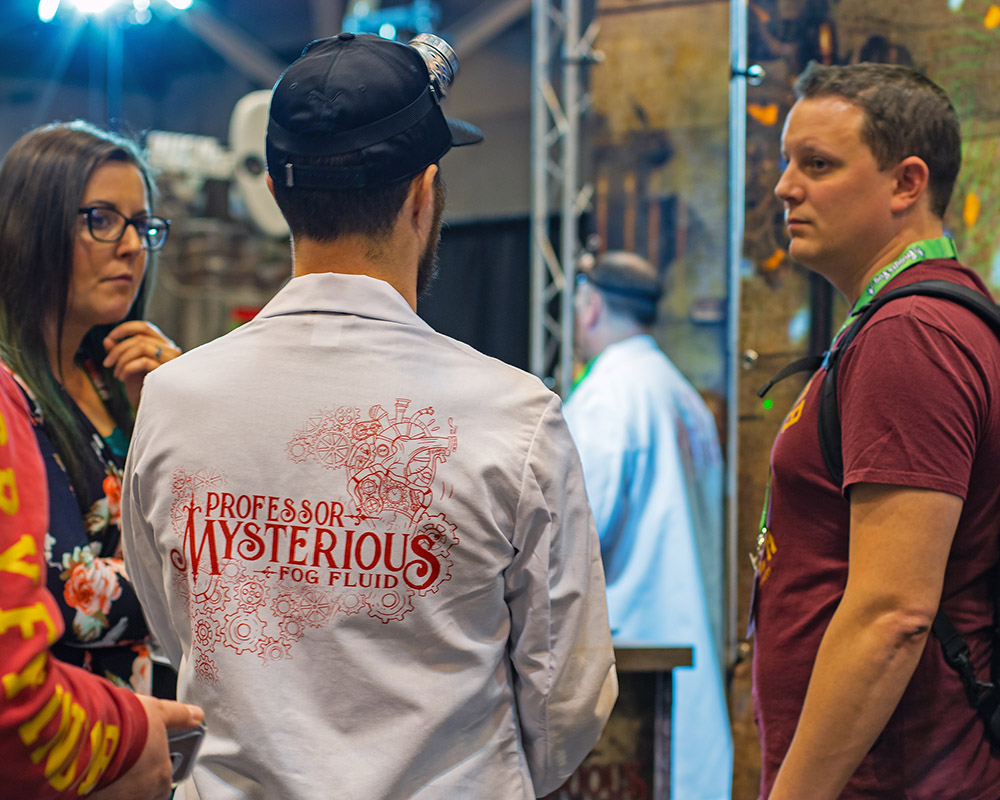 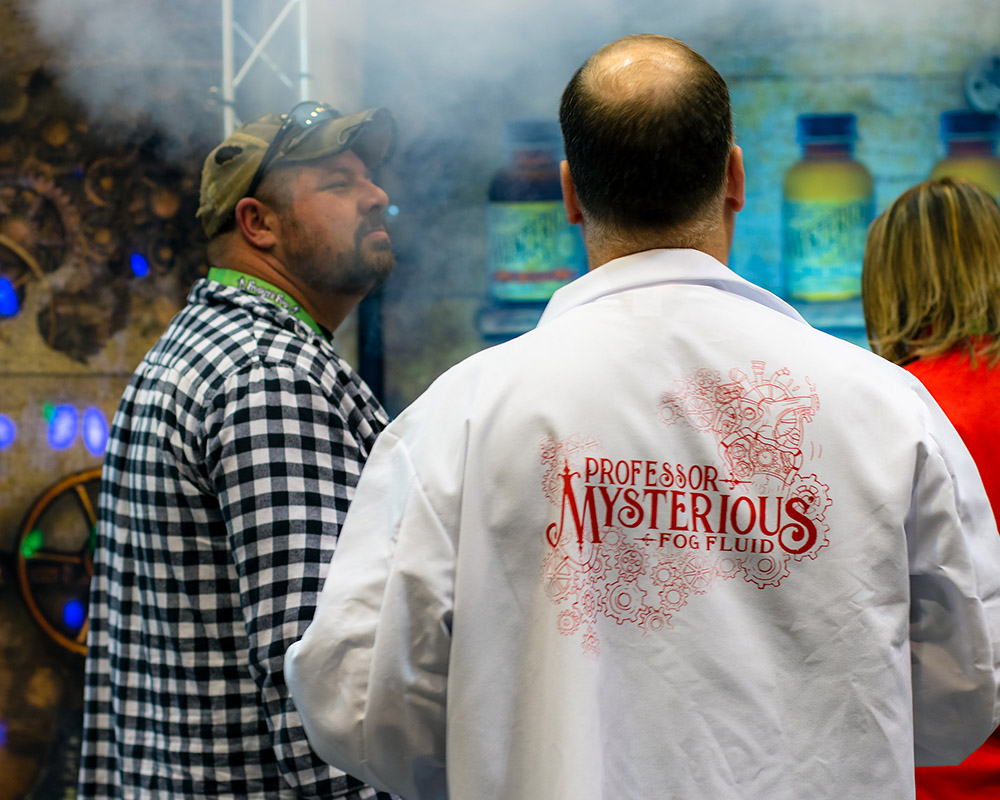 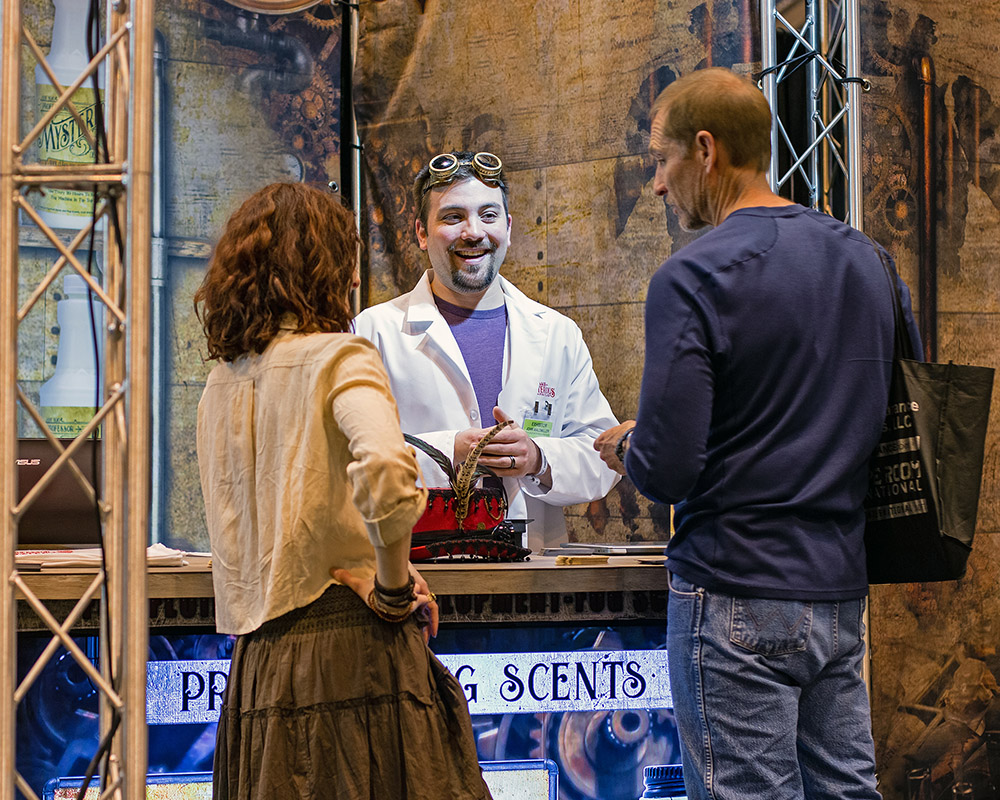 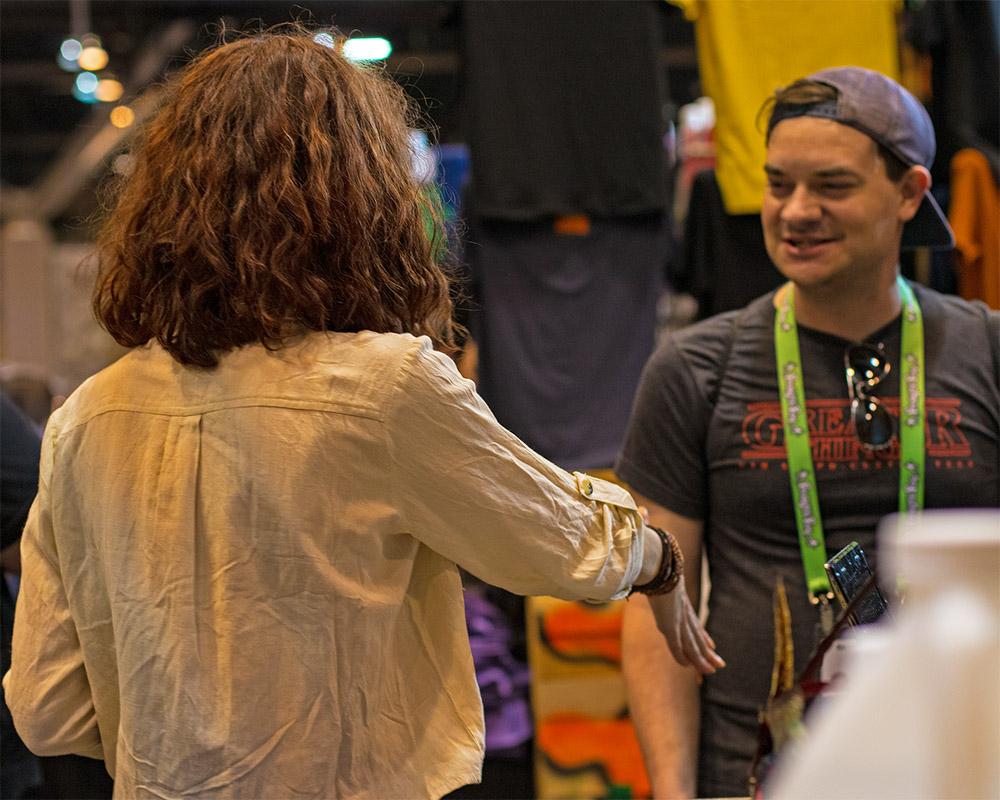